PC film is a kind of material in the plastics industry. PC film has many kinds of colors. The most common are black and transparent PCs. The shape is not limited, and there are also sheets and coils. The films can be cut, injection molded, and molded into various shapes according to the manufacturer's requirements.
There are many kinds of PCs in the plastic industry, including transparent PC film, black fireproof PC film, insulated PC film, PC gasket, frosted PC film, brushed PC film, scratch-resistant PC film, etc. Although the names are similar, their respective application areas and roles are different.
The three models, such as matte PC film, halogen-free flame-retardant PC film, and scratch-resistant PC film are collectively called PC sheets in the industry. It is a thermoplastic engineering plastic with excellent performance, outstanding impact resistance, creep resistance and dimensional stability. It is the best product with good transparency and the fastest growing general engineering plastics among five engineering plastics. Mainly used in high-tech fields such as automotive, electronic appliances, construction, aerospace, and computer.

With the wide range of applications of PC film, the characteristics of PC film in different industries are different. The transmittance of transparent PC, black PC or matte PC can be measured with LS117 densitometer.
Test method of LS117 densitometer: short press the test button and select to enter the ABS test interface. Start the measurement when there is no test sample. Pull up the receiving probe, put it into the test sample and then tighten it. The current T value is the light transmittance value of the test sample. 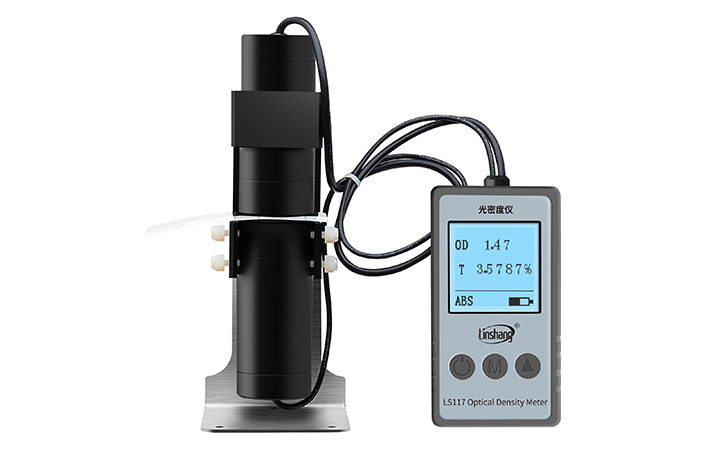 In addition, if the LS117 densitometer is used to test large samples and the sample to be tested cannot be placed in the test slot in the holder, the light source probe and the receiving probe should be removed from the test holder and measured by the method of holding the sleeve.