Why Do We Use Lens Transmission Meter?

Eyeglass lenses in life are mainly divided into two types, concave mirrors and convex mirrors. The concave mirror is mainly used for myopia. Its main feature is that the middle thin edge is thick. The convex mirror is mainly used in far vision and presbyopia and the main feature is that the middle thick edge is thin. There are three main factors affecting the quality of glasses: light transmission, anti-blue light effect, anti-violet effect. With the development of the times, more and more people use glasses in their lives. So why do we need to use the light transmission meter to detect the lens quality? There are three main reasons:

1. The lens transmission meter can detect the light transmittance of glasses.

We know that light refracts as it passes through the mirror. Because of the different mirror shapes of the concave and convex mirrors, the direction of the light is different when it is refracted. Therefore, the general lens will add or subtract the reflective film according to the specific situation. The light transmittance of the lens is related to the refraction of the material. Generally, the higher the refractive index, the lower the light transmittance. Does the use of the addition and subtraction film affect the transmittance of the lens? We need to use the lens transmission meter for testing. The transmittance of the spectacle lens is generally 91%. If it is lower than this standard, it will affect our view. 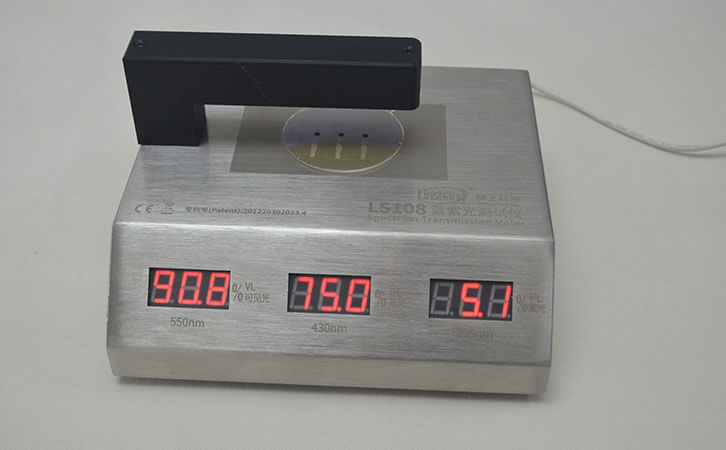 Why do we want to detect the anti-blue light effect of the lens? It is because blue light can cause damage to our eyes. The main points are as follows:

The wavelength of blue light is shorter, so the blue light is generally focused at a point in front of the retina. So when we look at computers, mobile phones, or tablets for too long, the eyeballs are in a state of tension, causing eye strain.

The blue light has a relatively high energy and can directly penetrate the lens to reach the retina, causing atrophy or even death of the retinal pigment epithelial cells. The death of light-sensitive cells can cause vision loss or even complete loss, resulting in irreversible losses.

The lens in the human eye absorbs some of the blue light, causing the lens to become cloudy and form a cataract. The younger the person is, the clearer the lens is, so the children's lens cannot effectively resist blue light. It is more likely to cause macula or cataract.

The effect of violet light and ultraviolet light on the human eye is also very large. Long-term exposure to purple light can cause corneal damage, foreign body sensation and photophobia. Long-term exposure can even lead to blindness.
The low lens transmittance will affect people's sight. Blu-ray and violet light are particularly harmful to the human eye. Therefore, we need to use the lens transmission meter to detect the transmittance of the spectacle lens and the anti-blue violet effect.