What is the Data Difference between 940nm and 1400nm Tint Meters for Testing the Same Film?

According to the built-in infrared light source band,the Linshang tint meter can be divided into two types:940nm and 1400nm. Due to different solar film production processes, the transmittance spectrum of each film is not the same.Most endothermic films have added infrared absorbing agents.By absorbing infrared insulation, they mainly absorb infrared rays near 940nm.Therefore,the endothermic films have better  infrared blocking performance at 940nm. The metal film is mainly produced by a magnetron sputtering process and has a good reflection ability to infrared rays.Most of the metal films reflect the infrared rays better at 1400 nm and therefore the 1400 nm infrared rays are better blocked.

For the films of different processes,we have introduced two tint meters with different infrared light sources.If you need to demonstrate the best thermal insulation characteristics of a solar film,it is best to first understand the type of solar film.If it is an endothermic film,it is recommended to use a 940nm light source for testing.If it is a metal film or ceramic film,it is recommended to use 1400nm tint meter. 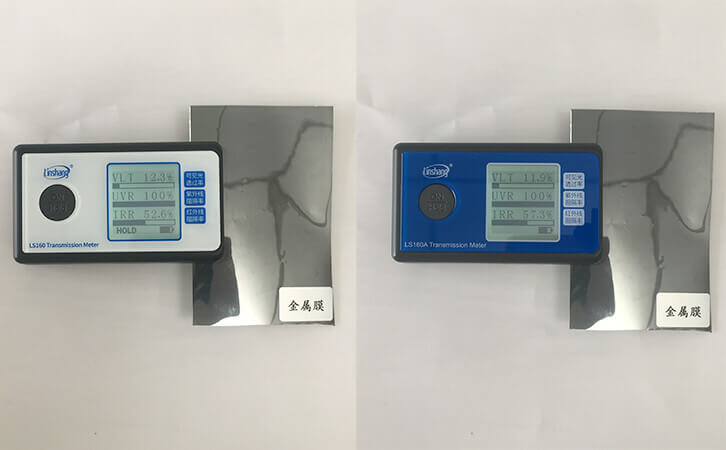 Many customers will ask us, can we use 940nm tint meter to measure metal films? Or can we use a 1400nm tint meter to measure endothermic films? The answer is yes. The instruments of different light sources measure the blocking rate of the solar film to infrared rays in different bands,which can objectively reflect the physical characteristics of the solar film. The data are true and accurate.

So how much is the data difference between the two types of tint meters for testing the same film? We really cannot give you an exact answer to this question.Because the transmittance spectrum of each film is different,some solar films may have similar infrared blocking performance at different wavelengths,while others have very large differences.

Finally, to sum up,there are large or small data differences between tint meters with different infrared light sources when measuring the same film.The data difference has nothing to do with the accuracy of the instrument,mainly related to the physical characteristics of the solar film .