With the improvement of the requirements of car film performance and the continuous development of technology, three generations of car films have been developed so far. The light transmittance tester can be used to detect the specific light transmittance and ultraviolet rejection rate of car films.
The first-generation automotive film was called "tea paper", that is, window paper. At that time, it was mainly used to block sunlight, so there was no effect of heat insulation and explosion protection. After all, it is the first generation product. The second generation car membrane has an explosion-proof function, so it is also called "explosion-proof membrane". The explosion-proof membrane is combined with a new type of viscose and a relatively thick film, which has a certain explosion-proof function. The explosion-proof membrane can also be thermally insulated and protected from sun. It's just that the thermal insulation rate is not too high. The most demanding of mankind is endless. Therefore, the third generation of "sun protection film" was born, now commonly known as "space film". Since it is the latest film, of course, the latest technology is used. Whatever nanotechnology, spectral microparticle technology, magnetron coating technology, etc. are used. The UV rejection rate of this kind of film is 90% and the paste effect is better. Anyway, it is a high-quality film that reduces the thickness and improves various performances. The light transmittance tester can be used to detect the specific transmittance and UV rejection rate of the car film. 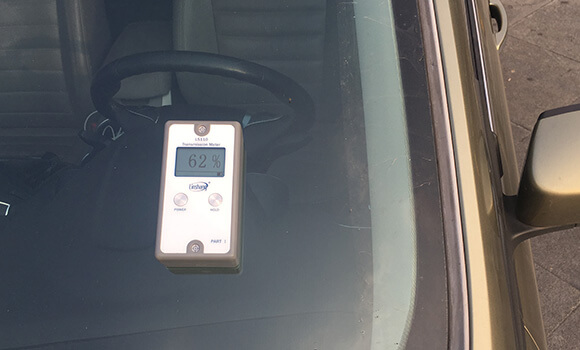 It is important to know that in addition to the heat insulation performance of the car film, the most important thing is the light transmittance. The driver needs to observe the road condition through the front windshield, the quality of the car film light transmittance will directly affect the driver's sight and driving. The country has a rigid standard for this indicator, that is, whether the car glass is attached or not, the light transmittance must be greater than 70%. However, even if the glass of the original car is not filmed, it will not be as translucent as the windows of the home. Therefore, the transmittance of the original glass without film is not 100%, basically between 75% and 85%. In order not to violate national standards, you must choose a front barrier film with a high light transmittance. You can use Linshang light transmittance tester to check whether the effect of the automotive film conforms to national standards.
Knowing this, it is estimated that everyone must choose the third generation of "sun protection film", so what else should be paid attention to when the film is now?
The following performance indicators cannot be ignored by car owners and friends: