The UV exposure machine transfers the image information on the film or other transparent body to the surface coated with the photosensitive material by turning on the ultraviolet light source. The ultraviolet light source plays a decisive role in the quality effect of the exposed product. The uniformity and stability of the light source will directly affect the exposure of the product. If the uniformity and stability are not good, the product may be overexposed.

Regarding the monitoring of the uniformity and stability of the ultraviolet light source on the exposure machine, the general exposure machine manufacturer will use the UV energy meter. It is possible to directly monitor whether the energy is up to standard during the exposure process.

The light source of the ultraviolet exposure machine is composed of a plurality of LED modules and is arranged side by side. So how do you determine if the light source is attenuated? Is the uniformity good enough?

Many domestic manufacturers use a UV energy meter to test different positions multiple times to see if the test data is consistent.There is a problem here. If the UV energy meter has different data for each test, how can it be determined that whether the light source is unstable? Or the instrument itself is unstable?

Something happened last week. A customer who made the exposure machine found us online and called to say, "Their company has a total of 5 brands of UV energy meters, but the data from each test is not the same, can you provide a set of LS128 uv energy meter to test the on-site prototype?" In order to solve the customer's problems, we brought two meters to the customer to test the sample. In order to test the stability and consistency of the LS128, two tests were performed.

The first one, using two sets of LS128 to test different positions at the same time, to see if the data of the two LS128 are consistent. After many tests, the data deviation of the two Linshang LS128 UV energy meters is very small, only about 1% (below), indicating that the consistency is very good. 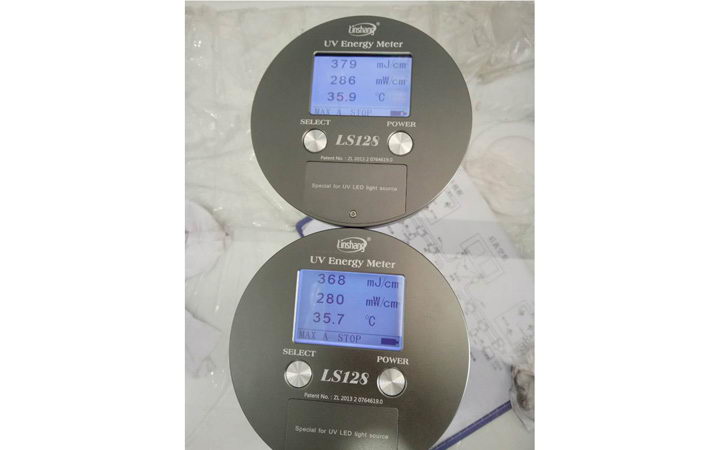 The second type, test the same position multiple times with two sets of LS128. After multiple tests, the data of each LS128 test is completely consistent and the stability is very good. After the test was completed, the customer was very satisfied and bought the two LS128 UV energy meters  on the spot.