The Linshang UV LED UV energy meter LS128 can be compared with foreign brands. This meter not only has many testing functions, but also has ultra-wide spectrum and ultra-wide range. It is the first choice for UV-curing energy meters.
Since its entry into the market, the LS128, an ultraviolet energy meter for UV LED light source testing, claims to be the only UV energy meter in the world that can compete directly with American EIT and Japanese ORC. So what are the advantages of LS128?
1.The imported and domestic ultraviolet energy meter generally can only test a single energy value, but the ultraviolet energy meter LS128 is a multi-function meter. It can not only test the energy value of UV LED light source, but also can test the corresponding intensity and temperature values. The measured temperature and intensity curves can also be displayed graphically. 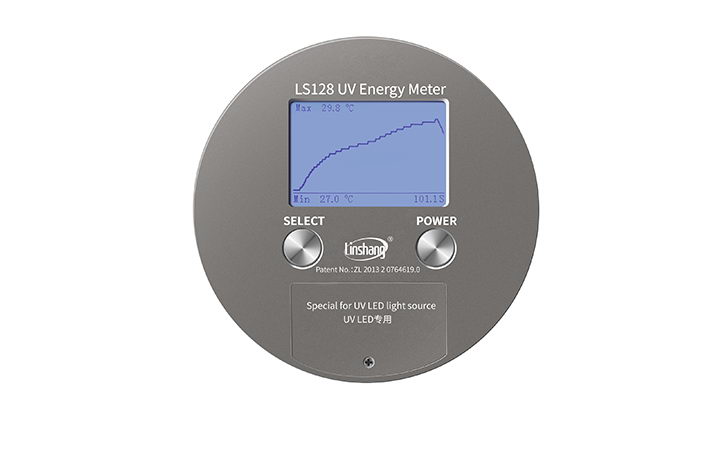 2.Ultra-wide spectrum (340nm-420nm) range of ultraviolet energy meter. It can test 365nm, 385nm, 395nm, 410nm, 420nm and other bands of UV LED lights which is the first choice for UV curing energy meter. The wide range can be up to 20W/cm2.
3. It can record nearly 60,000 power data, 3800 temperature data with large-capacity memory function. The stored data won’t lost when it is powered off. It will automatically display the last test data after powering on and you need to delete the test data manually.
4. High-precision and fast-responding temperature detector, which dynamically measures the actual temperature in the curing machine. Built-in heat filter with high temperature resistance for long-term operation at 100 degrees Celsius.
5.It can also be connected to the computer through the USB interface providing with detailed record data, curve analysis and printout test report.
With so many advantages. What are you waiting for?  Pick up the phone and order it! Contact number 0755-86263411.