From:Linshang Time:2019/12/06 14:55:00 Browse:240
Metal film and decalescence film have different processes, so when the window tint detector with different light sources is used for testing, the heat insulation rate is generally different. So what is the difference between these two films?

According to the material, the solar film can be divided into metal film and non-metal film. The metal film is what we often call the magnetron sputtering metal film. In short, metal particles are sputtered onto the film at high speed in a magnetic field. Multiple layers of different metal particles block light in different wavelength bands. Most of the reflective films are metal films, which have better heat control. But it will affect mobile phones, ETC and GPS signals. Non-metallic films are mainly decalescence films, but excessive heat absorption can easily cause the temperature of automobile glass to rise faster.

Linshang Technology has independently developed and produced window tint detector since 2008. Based on many years of experience, we have found that most metal films have a good barrier to infrared rays at 1400 nm, while decalescence films have a good barrier to infrared rays at 940 nm. So, we invented window tint detectors for two different light sources. Of course, both instruments are suitable for any kind of solar film and the measured values are also accurate. If you need to measure the infrared rejection rate of a film for two wavebands at the same time, we also have a versatile window tint detector LS182, which can measure the average value of two infrared rejection rates at the same time. When comparing the comprehensive performance of the film, The data is more comprehensive and objective. 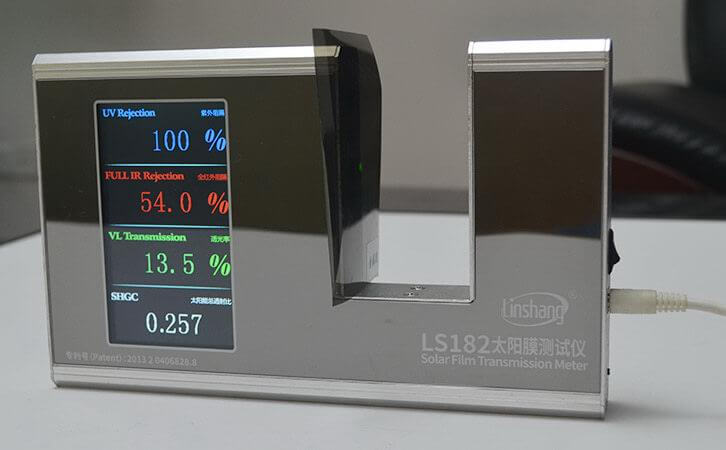 In addition to metal films and decalescence films, there is also a more common type of ceramic film. Since ceramic films are also different types, we also recommend that customers understand the production process of the film before selecting the instrument. Or you can send film samples to us. We can arrange the test for you and send you the data after testing. Then you choose the most suitable window tint detector.