Seven Mistakes to Avoid when using Paint Meter for Cars

From:Linshang Time:2020/01/13 14:14:00 Browse:252
Learning to use paint meter for cars correctly can bring huge benefits to customers. In this article, we have summarized seven major mistakes that should be avoided when using a paint meter for cars based on many years of experience.

Most second-hand car appraisers boast a wealth of experience in car inspection and tend to believe that their judgments are correct. And a small number of people look down on those who use paint meter for cars . Eventually, when they started using the instrument, they found that the data measured by the instrument was often scientifically based. So when you start using the instrument, believe it.

Without a paint meter will cost you a lot. Going to car inspection or buying a car without a paint meter is like going to the battlefield without a gun. A client once shared this story with us. He was going to buy a second-hand Lecasas from his good friend. His friends told him it was just a little paint on the engine compartment cover. The client felt that his friend was right, but when he went out, he forgot to bring the Linshang paint meter. After thinking, he decided to go home and get his instrument. As a result, a paint meter was found and the car's left front fender was also repainted, but his friend did not tell him. After discussion, he bought the car at a suitable price. Without the help of Linshang paint meter for cars, he might have to spend an extra 10,000 RMB.

Some customers have put the paint meter into use after only using it once or twice. After a year and a half, we used it again and found that the battery was insufficient. Therefore, if the paint meter is not suitable for a long time, we recommend removing the battery.

Mistake 5-Don't understand the meaning of the reading

Many people think that the paint thickness of cars is the same. The most common question we encounter is "How thick is the original paint for this car?" To successfully use the instrument, we must learn to measure different parts of the car. Then use the obtained data to analyze which parts of the car have been repaired. Usually there are few accidents on the roof, so we can use the paint film value of the roof as a reference value without knowing the original car paint. The original paint thickness of most cars is about 100 microns.

If you are measuring a car with an original paint thickness of 140 microns and you suddenly find that only 110 microns is measured in one place, it may be that this part has been replaced. The body repair shop may be too thinly painted. Therefore, it is not only the paint film that is too thick that needs our attention, but the value that is too low also needs attention.

Mistake 7-When the problem is found, the car door frame is not checked in time 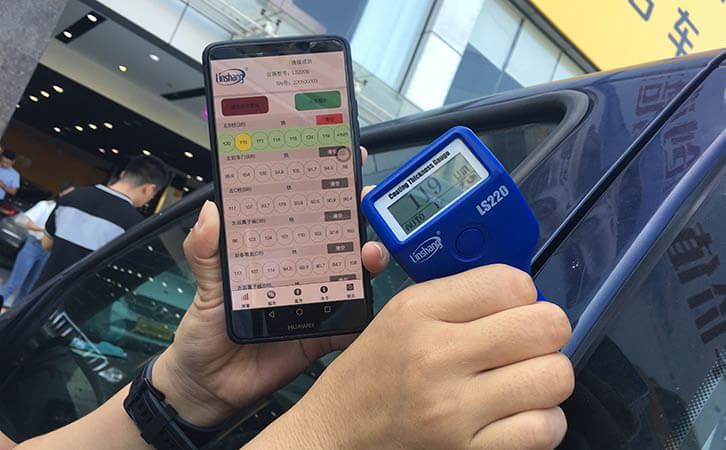