How does Plastic Film Affect the Greenhouse Light Transmittance?

At present, the plastic films used in China's energy-saving solar greenhouses are mainly polyethylene (PE) films and polyvinyl chloride (PVC) films. Recently, an agricultural ethylene-vinyl acetate (EVA) film has been introduced, which is very promising. Films of different materials have different light transmission properties. Comparing the transmittances of the above three agricultural new and clean plastic films to different wavelengths of light, it can be seen that in the visible light band, the polyvinyl chloride film has the highest transmittance, the polyethylene film has the lowest and the vinyl acetate film is between the two. But the difference between the three is not large; the pair of vinyl acetate and polyethylene film has a wavelength less than 0.
The transmittance of ultraviolet light at 32 microns is significantly higher than that of polyvinyl chloride, of which the vinyl acetate film has a higher transmittance; In the near-infrared light region, the transmittance of the three films is very high, but in the far-infrared light (that is, Heat radiation part), the transmittance of polyvinyl chloride film is significantly lower than that of vinyl acetate and polyethylene film. This is why the night-time insulation effect of the greenhouse covered with polyvinyl chloride film is better.
Solar greenhouses require thin films to be transparent to solar radiation with a wavelength of 0.35 to 3.00 microns, because this part of the light is very beneficial to promote crop growth and development. Ultraviolet light with a wavelength of less than 0.315 micron is harmful to most plants. Near-ultraviolet light with a wavelength of 0.315 to 0.380 micron can participate in the synthesis of anthocyanins, vitamin C and vitamin D in some plants. It can also inhibit the building of plants ; In addition, the wavelength is less than 0.
The near-ultraviolet light of 345 micrometers can promote the formation of conidia of gray mold. The near-ultraviolet light with a wavelength of less than 0.37 micrometers can induce the formation of sclerotinia sclerotiorum. Taken together, it is required that the film has high absorption or high blocking ability to ultraviolet rays with a wavelength less than 0.35 microns. Far-infrared rays with a wavelength greater than 3.0 micrometers are mainly thermal radiation, so the film is required to have a strong barrier to it.
With the use of time, the film will gradually age and the light transmittance will gradually decrease. According to measurements, a new, clean ordinary PVC film with a transmittance of 90% can be reduced to about 55% after 60 days of use and only 15% after one year. For clean polyethylene film, the light transmittance can be maintained at about 82% after 60 days of use and 58% after one year.
During the use of the film, water droplets and dust will adhere to its inner and outer surfaces, which can reduce the light transmittance of the film by more than 30%.
In order to improve the light transmission performance of agricultural plastic films, many agricultural film manufacturers have continuously improved their production processes and added a variety of auxiliaries. They have successively produced a variety of composite functions such as anti-aging, anti-fog and dust prevention. plastic film. If certain surfactants are added to the raw material, it can be processed into anti-fog film (also known as non-drop film or drip film), which can break the mist formed on the film surface, but only form a thin water film and flows away along the membrane surface.
In addition, agricultural films with special functions, such as diffuse scattering film, light conversion film and thermal insulation film have also been developed. In production, when selecting agricultural films, in addition to choosing a film type with high light transmittance, the weather resistance, pollution resistance and mechanical resistance of agricultural films should also be considered. During use, you should also pay attention to cleaning the film frequently. 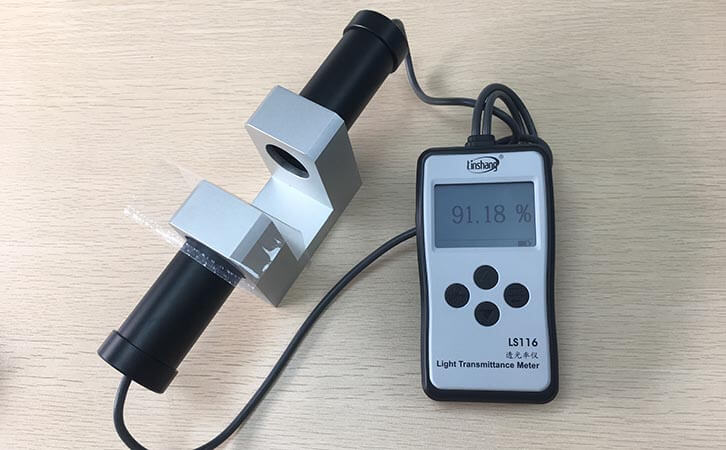 1. For the transparent greenhouse film that only needs to test the transmittance, it is recommended to use the LS116 visible light transmittance meter designed for parallel light paths to test its transmittance.

2. For translucent greenhouse film, it is recommended to use the optical density meter LS117 of diffuse transmission principle to measure the transmittance.

3. For the greenhouse film with color and need to test the infrared and ultraviolet transmittance, it is recommended to use the LS183 light transmission meter to measure the transmittance.