Linshang LS162 portable solar film tester bring convenience for people who often need to visit the supplier users everywhere. It is easy to use and carry with small size, light weight. And it is easy to operate.
There are two series of Linshang portable solar film testers, one is the LS160 series, another one is the LS162 series. The main difference is that the visible light band is different, and the materials that can be tested are a little different, but they are all easy to carry, small in size, light in weight, and simple in operation.
If we need to classify the circumstances, it can be roughly divided into a desktop design solar film tester, which is convenient for selling the film to the customer in the store. The desktop design looks more professional, and the numbers are clear at a glance. It is also convenient to explain.
There are also portable solar film testers, which are convenient for people who often need to visit supplier users everywhere. A portable meter is needed to keep track of the thermal insulation of the solar film, UV and light transmission parameters. Not only should it be portable, but it’s also convenient to change batteries. It is also best to test the film glass or the glass film on the car directly.
The Linshang LS162 series of portable solar film testers basically meet the needs of people who travel frequently. It is about the same size as an Apple phone, but slightly thicker. However, the test slot is 8mm wide, and the parallel light path is designed to make the test data more accurate. The battery cover does not require a screwdriver to operate. It can be used with four AAA batteries that can be purchased anywhere in the market. 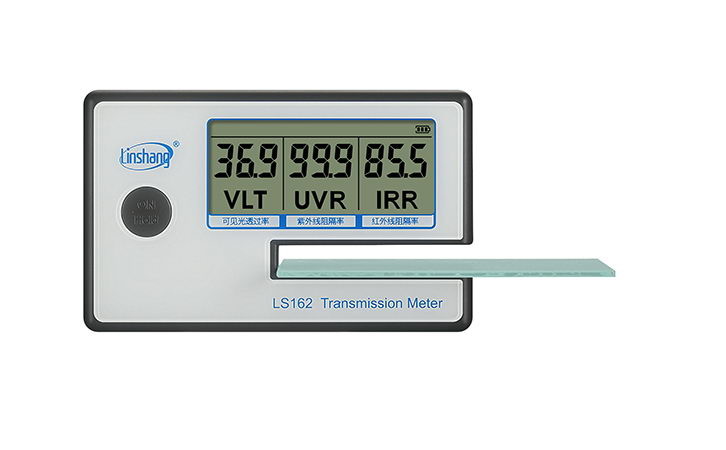 The portable solar film tester of the LS162 series is also divided in the band. The near-infrared 950nm is suitable for testing high-insulation film, and the mid-infrared 1400nm is suitable for testing metal film.
The portable solar film tester has only one button. After the self-calibration, the diaphragm or the stick-film glass is placed in the test slot, and the transmittance values of the three parameters of heat insulation, ultraviolet shielding and light transmission are instantly displayed. If you want to convert the rejection rate, use 100 minus the data displayed. It is very convenient for reading and understanding .