UV LED light sources have lower energy consumption, higher curing efficiency and portable environmental protection. The UV light meter designed to test UV LED lamps has played a role in improving process quality.
UV LED light source, due to lower energy consumption and higher curing efficiency. The LED curing technology matching UV LED ink is becoming the "new darling" for printing enterprises to achieve energy saving and environmental protection. It has an strike on traditional UV-curable inks and varnishes. Conventional UV curing uses a variety of gases to charge the tube, while UV LEDs are LEDs that are produced by semiconductors.
UV LED light curing technology first appeared at the Drupa 2008 print show for the curing of digital inkjet inks, as well as for flexographic or other printing processes.
There are a lot of optimists about UV LED technology, and some users think that the popularity of UV LED is still very early. However, UV LEDs have lower energy consumption and longer life than traditional light-cured light sources, which is an obvious absolute advantage. However, the curing speed of UV LEDs requires more experiments to adjust.
Phoseon Company was the first to use UV LED lamps in the label printing industry and succeeded. With the advancement of the society and the needs of customers, the printing speed of labels needs to be faster and the label materials need to be thinner. The heat emitted by the UV LED must does not damage the label and the heat sensitive substrate.
The Linshang LS128 UV light meter is designed for testing UV LED lamps in China, which can test various wavelengths such as 365nm, 385nm and 395nm.The UV light meter LS128 can also test the corresponding intensity value and temperature value when testing the energy value. And there is a curve display. 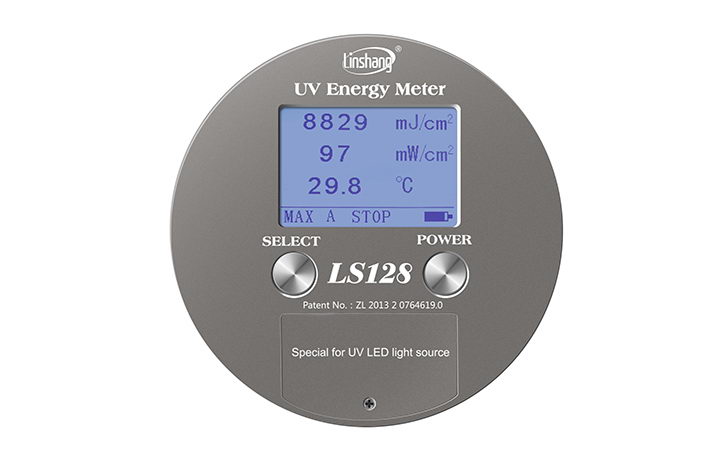