Due to the appearance, weight etc. relative to other film temperature tester, LS300, its size is bigger and weight is heavier. But these doesn’t affect the demonstrate effect, and the operation method is simple, the method can refer to the following contents:
When we received LS300 Temperature Demonstration, The equipped with two independent 150W Philips lamps are packaged separately, not assembled in the instrument box, because it takes into account in transit, there often have vibration, in order to prevent the equipment damaged, so manufacturers ship must take down two lamps and also do the shockproof packaging work. 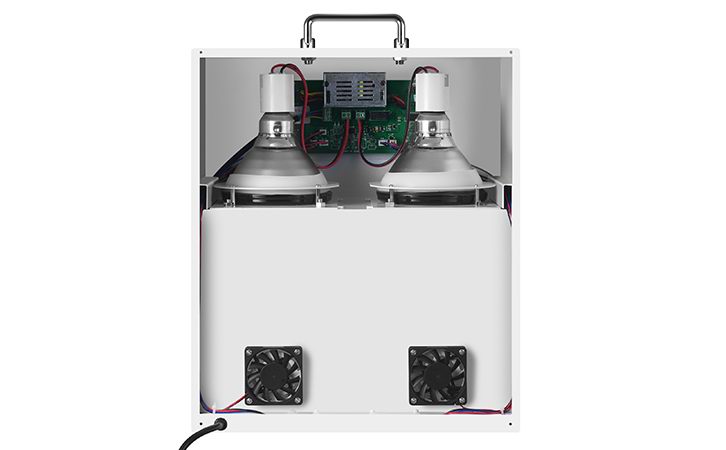 So when we received the goods, remove the packing, first things first is install the 2 pieces of 150W Philips lamps in the light box and tight up. installation requires special attention, infrared lamps marked Left and Right (RL). In disassemble rear cover is installed infrared light, need to be marked (RL) lamp installed in the corresponding box. In addition, when installing the infrared lamp, need to dismantle the screws, there will have a little trouble while dismantling screws. so should pay careful attention to, and insist on one-time installation.
The lights LS300 of Insulating Window Film Light Box are installed, you can switch on the power, two 150W Philips infrared lamps and ultraviolet lamp will light, at the same time, 2 pairs of the temperature difference digital tubes and temperature digital tubes will start flashing, then a few seconds of time, temperature digital tube display data should be "0.0", and the temperature of the digital tube display temperature value is the current two infrared temperature value; then we can put two pieces of different glass (such as filmed glass and white glass) into light box.
Then you can press the red "start" button, we can see two temperature values, the temperature at the filmed glass side is same as original almost consistent, but not at the film temperature increased significantly, and the top temperature digital display data from the previous "0" will slowly rise the insulation film temperature tester, LS300 test time for one minute, one minute after will automatically turn off the lamps, then, on both sides of the temperature value and temperature difference value will flash for a few seconds, after stopped flashing beating. on both sides of the temperature value and temperature difference value will be slowly down. Because in a minute after, the test automatically turns off the infrared lamp,
There are 2 small fans below corresponding where infrared lamp installed, after finished test, 2 small fans automatically rev, the main role is to cool down, 4 minutes after, the fan will automatically stop, after the two sides of the temperature is basically the same, you can carry out the next test. That in the above tests, we can see filmed glass with better heat insulation performance than ordinary glass that without film.
In addition, actually in the test, we can also advise clients or himself put hands under the glass on both sides (that is, above both sides of the detection port). At the same time, we also can use their hands to feel the heat insulation.
Moreover, there is a UV LED on LS300 Temperature Demonstration, which is use to test the uv isolation performance of heat-insulating film. we can take one hundred RMB to do the test, with ultraviolet LED irradiation, it will be clear to see the watermark, Place a good insulation film between the ultraviolet LED and the RMB, the watermark is no longer visible. That is to say, the insulation film is with good uv isolation performance.
Finally, while go out during the exhibition, need disassemble the infrared lamps, to prevent the vibration damage of infrared lamp.