From:Linshang Time:2019/09/05 15:48:00 Browse:318
This article will briefly introduce the measurement methods and principles of coating thickness gauges and their advantages and disadvantages. 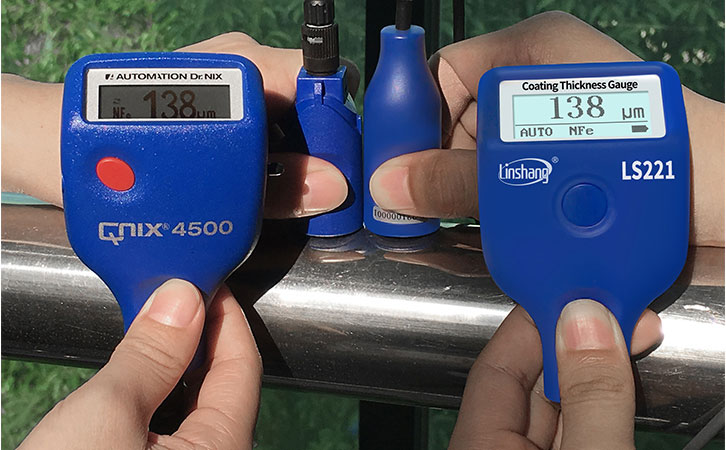 The high frequency AC signal generates an electromagnetic field in the probe coil of the eddy current thickness gauge and when the probe is close to the conductor, an eddy current is formed therein. The closer the probe is to the conductive substrate, the larger the eddy current and the greater the reflection impedance. Based on this principle, the amount of feedback action characterizes the distance between the probe and the conductive substrate, that is, the thickness of the non-conductive coating on the conductive substrate. Since such probes are specifically designed to measure the thickness of a coating on a non-ferromagnetic metal substrate, they are often referred to as non-magnetic probes. Non-magnetic probes use high-frequency materials for coil cores, such as platinum-nickel alloys or other new materials. Compared with the principle of magnetic induction, the main difference is that the probes are different, the frequency of the signals is different, and the signal size and scale relationship are different. Like the magnetic induction coating thickness gauge, the eddy current coating thickness gauge achieves a resolution of 0.1 um, a tolerance of 1%, and a high range of 10 mm. Coating thickness gauges using the eddy current principle can in principle measure non-conductor coatings on all conductors, such as aerospace aircraft surfaces, vehicles, appliances, aluminum alloy doors and windows and other aluminum surface paints, plastic coating Layer and anodized film. The cladding material has a certain conductivity and can also be measured by calibration, but it is required that the ratio of the conductivity of the two is at least 3-5 times (such as chrome plating on copper). Although the steel substrate is also an electrical conductor, such tasks are more suitably measured using magnetic principles. The eddy current thickness gauge is suitable for measuring the thickness of the non-conductive layer on the conductive metal, but the magnetic thickness measurement method has low precision.

Ultrasonic coating thickness gauge mainly consists of two parts: the main unit and the probe. The host circuit includes a transmitting circuit, a receiving circuit and a counting display circuit. The high-voltage shock wave generated by the transmitting circuit excites the probe to generate an ultrasonic transmitting pulse wave. The pulse wave is received by the receiving circuit after being reflected by the medium interface, and is processed by the single-chip microcomputer. The liquid crystal display displays the thickness value, which is mainly obtained by multiplying the propagation speed of the acoustic wave in the sample by half the time passed through the sample. Due to the convenience of ultrasonic treatment and good directivity, ultrasonic technology measures the thickness of metal and non-metallic materials, which is fast, accurate and non-polluting, especially in the case where only one side can be touched. It is widely used in various plate, pipe wall thickness, boiler vessel wall thickness and local corrosion and rust. Therefore, it is responsible for product inspection of metallurgy, shipbuilding, machinery, chemical, electric power, atomic energy and other industrial sectors. And modern management plays a major role. The coating thickness gauge also named paint thickness gauge designed according to the ultrasonic pulse reflection principle can accurately measure various plates and various processed parts, and can also monitor various pipes and pressure vessels in the production equipment to monitor their corrosion after use. It is applicable to the measurement of the thickness of the multi-layer coating or the case where neither of the above methods can be measured.

The electrolytic thickness measurement method is very different from the above three types. It does not belong to non-destructive testing and needs to destroy the coating layer without high precision. It is a little more complicated to measure, so it is less common.

X-ray and β-ray method are non-contact non-destructive measurement, but the device is complicated and expensive, and the measurement range is small. Because of the radioactive source, the user must comply with the radiation protection regulations. The X-ray method can measure extremely thin plating, double plating, and alloy plating. The beta ray method is suitable for coatings with coatings and substrates with an atomic number greater than 3. Such coating thickness gauges are very expensive and are suitable for special occasions.

With the advancement of technology, especially after the introduction of microcomputer technology in recent years, the coating thickness gauge using magnetic method and eddy current method has taken a step toward micro, intelligent, multifunctional, high-precision and practical. The resolution of the measurement has reached 0.1 micron, and the precision can reach 1%, which has been greatly improved. It has a wide range of applications, wide measuring range, easy operation and low cost. It is the most widely used coating thickness measuring instrument for industrial and scientific research. Therefore, the most common method used in China is the 1/2 method. The third type of ultrasonic coating thickness gauge has developed rapidly in recent years. Because it uses a non-destructive method to neither damage the coating nor damage the substrate, the detection speed is fast, and a large amount of inspection work can be carried out economically, more importantly. The price of such instruments is also moderate, suitable for large-scale applications and measurements. Before purchasing a coating thickness gauge, we must first understand the measurement methods, advantages and disadvantages of the undercoat thickness gauge, and select the type of coating thickness gauge according to the product we want to measure and the price of the purchase.

If you want to know about the automotive paint meter, please read "How To Measure Paint Thickness On A Car With Automotive Paint meter?".