What are the Non-metallic Protective Layers of Hardware?

The non-metal protective decorative coating sprayed on the surface of metal hardware is mainly plastic and paint. The color of plastic and paint can be said to be everything, which is usually beyond the reach of metallic decorative layers. However, the main disadvantages of plastic and paint layers are their poor ability to resist oxidation and ultraviolet rays. They will gradually age and become brittle over time, losing their original bright color and starting to darken and crack and fall off. In addition, the bonding strength with metal is also not as high as that of metal plating, and it is easy to wear away. Therefore, it is not suitable as a protective decorative coating for moving parts. In order to improve the performance of paint on metal surfaces, amino paint (baking paint) is mostly used for the paint layer of hardware. For some special performance requirements, such as oil-proof, insulation, fluorescent, etc., these special paints can also be sprayed. For spray-painted plastic and paint protective decorative hardware, it is mostly used for furniture below mid-range.

3. Detection of the protective coating thickness on the metal hardware surface 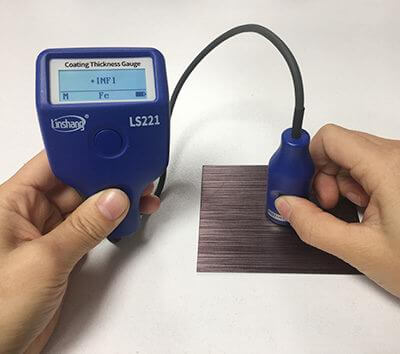