Before people drink water, they must boil the water. This is because when we heat up, the boiling water destroy some microorganisms that have reached the temperature tolerance limit, because the tolerance temperature of each microorganism is different. Since the disinfection effect is so good, why do we use ultraviolet sterilizer?
You know, microorganisms include bacteria, viruses, spores and other tiny lives that we can't see with the naked eye. Among them, many bacteria have been killed when the temperature reaches 40 ° C, but for some heat-resistant bacillus. The spores can be killed at the temperature of 121 ° C and the boiling point of water is 100 ° C.
Tap water is delivered to households through municipal pipelines after being disinfected by the water plant. The purified and disinfected water from the water plant is relatively clean. But what purpose do we boil it?
Some water plants use chlorine disinfection, which will cause volatile substances such as chloroform, haloacetic acid, haloacetonitrile, haloketone, halophenol and haloaldehyde stay in the tap water. So when we usually boil water, it needs to be precipitated for a while after the water boils. This is why we use UV sterilizers.
As a leader in water disinfection technology, UV sterilizer has the widest sterilization range. The best way at present is to use UV sterilizer to kill it effectively. More importantly, many water plants now use liquid chlorine disinfection (because chlorine dioxide is too expensive and inconvenient to use). In this case, the disinfection by-product, which is residual chlorine, is easily contained in the water. It cannot be removed during boiling. And ultraviolet rays can play a good role in the decomposition of residual chlorine.
Whether the luminous efficiency of the ultraviolet germicidal lamp meets the standard and whether the power of the lamp has decayed after being used for a period of time requires the use of a waterproof UV intensity meter.
With the continuous maturity of technology, UV air disinfection and water sterilization are gradually widely used. In addition to water treatment, there are also some open-air environmental monitoring stations that will also use ultraviolet detection instruments and because of the open air there will be humid environments such as rain and dew. The waterproof UV intensity meter is also an electronic product, which will inevitably cause damage in a humid environment, so the waterproof treatment of the waterproof UV intensity meter is particularly important. 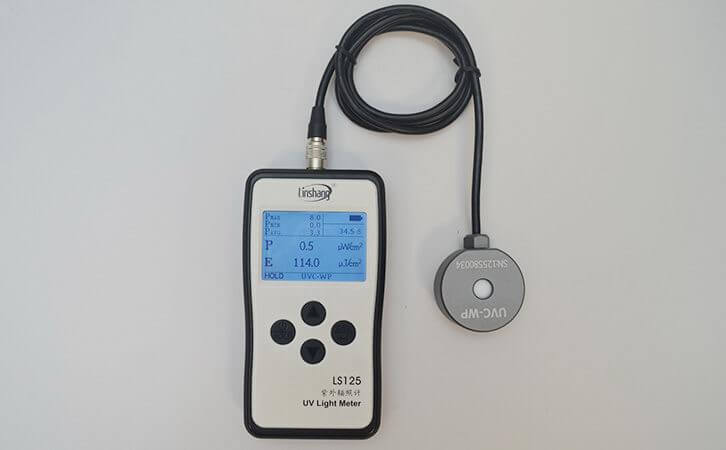 The LS125 + UVC-WP waterproof UV intensity meter independently developed by Linshang Technology is a waterproof UV intensity meter. The instrument can be water-resistant to 1 meter and it can be directly placed in sewage treatment equipment for testing. The instrument can also be placed in the open air for testing. The measuring range is up to 200000uw / cm2, which can detect high-power ultraviolet lamps to ensure the best disinfection effect of ultraviolet sterilizers.
LS125 + UVC-WP waterproof UV intensity meter can measure energy value and power value at the same time. It also has rich statistical functions, which can display real-time power value, maximum value, minimum value, average value, measurement duration and energy value at the same time. There are uw / cm2, mw / cm2, and w / m2 units that can be switched freely without manual calculation.